Mana and Leopard 3: Forces of Nature 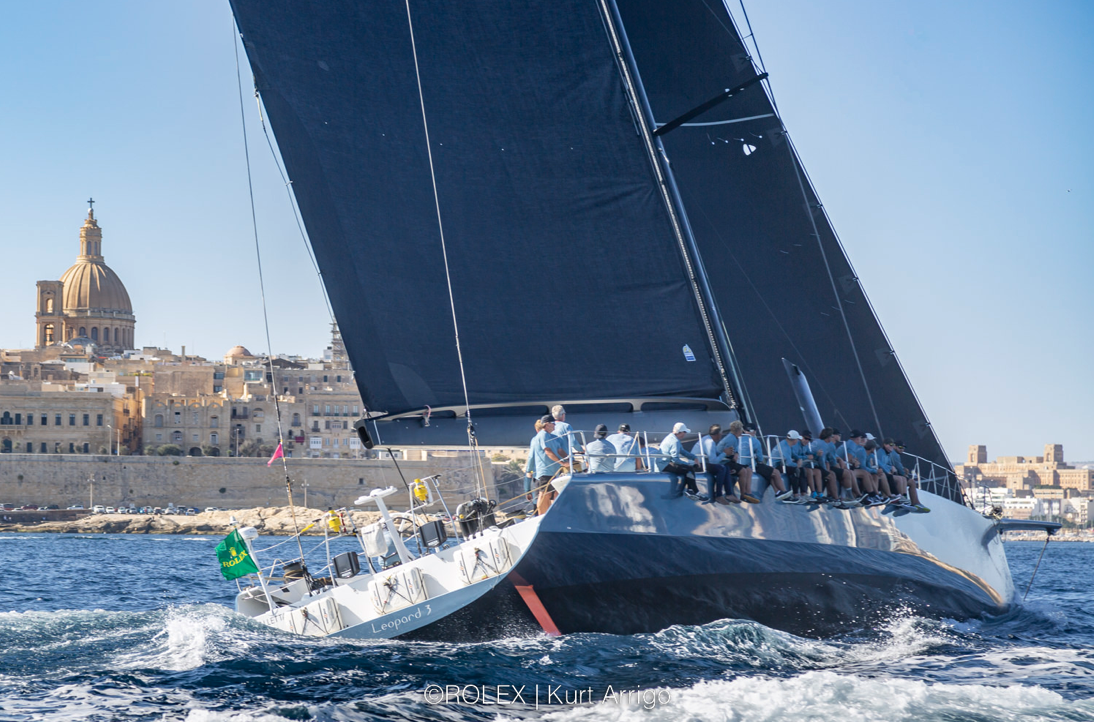 Just after midnight this morning, Tuesday 25 October, the 43rd Rolex Middle Sea Race reached its first crescendo as Mana ghosted across the finish line to beat a charging Zoulou by a mere 56 seconds at the mouth of Marsamxett Harbour. The race had appeared in the bag for Mana from as far back as Favignana. A real twist at the death saw a two pronged attack from Zoulou and Maserati Multi 70 create a roulette wheel moment at the South Comino Channel, and then again which could have deprived the Italian trimaran of a deserved victory. At these moments, it would have been a brave gambler to chance everything on the black (and white) of a vulnerable looking Mana.

As it was, the crew of Riccardo Pavoncelli’s Mana (ITA) held their nerve and held off the unwelcome advances, crossing the finish line at 00.32.38 CEST, with Erik Maris’ Zoulou (FRA) breathing searingly hot at 00.33.32 and Maserati (ITA) finishing at 00.43.04, neither just able to deliver what likely would have been the second nautical miracle in Malta since the shipwreck of St Paul in 60AD.

Then, almost 12 hours later, a second crescendo with the arrival of the first monohull. Leopard 3 rolling back the years to join an exclusive group of four other yachts to have secured line honours on three or more occasions. While Rambler 88 remains the most successful, with five successive wins, this result was special for skipper Chris Sherlock who first raced the course in 1997 and Joost Schultz, one of the crew, on his first ever Rolex Middle Sea Race.
Multihull Line Honours

With five MOD 70s, out of a total fleet of seven, gathering for the first time since 2012, Pavoncelli was understandably thrilled with the result: “We have been trying to get all these boats together for a long time. Mana is one of the only original ones, so it was particularly satisfying for me to win, because we have maintained the boat in its original state.”

According to the French racing skipper Alexia Barrier, keeping Mana close to her original configuration was one of the secrets to the success: “Riccardo put together the best possible team and I am lucky to have been part of it. Paul Larsen is the fastest driver, and Johnny Malbon did super tactics. Mana is in perfect shape, a pure MOD 70, which means no modifications and it is kept light. In this kind of race, it makes a big difference even if we do not have the best sails. We kept the boat going, moving, all the time.”

The race appears to have been exhilarating, stressful, nerve-wracking and worrying in equal measure. From the start Frank Slootman’s American entry Snowflake took off. “At first we were not so happy when we saw Snowflake going away with its big mast,” said Barrier. “But we found our settings, how to work together and, in the end, it went very well.”

It was a tremendous race according to Pavoncelli. The crew kept on their toes right to the finish. “We had been hunted for 400nm and more, we were constantly looking behind our back,” he advised. “Just when we were really worried about Zoulou, Giovanni sneaked up and he was an additional threat. Frankly until the last few seconds we did not know if we were going to make it.”

Zoulou is a similar boat to Mana, but with bigger sails, a different set up and more developed foils. Its crew included Loick Peyron, who had sailed with Mana last year. Giovanni Soldini and the heavily modified Maserati, sporting a full foiling package, were also a substantial threat, wily foxes, never to be discounted.

“It was a beautiful race, said Pavoncelli, even if it was not always straight-forward. “It was particularly painful arriving at Strombolicchio, because it looked so listless,” he continued. “We stared at the island for hours, nothing was moving. Eventually we got some breeze and I will remember always going up wind in big waves and 25 knots inside a washing machine. It was a great race for the emotions, very stressful at times, but fantastic.”

Larsen, Malbon and Barrier clearly gelled as an afterguard after Stromboli. “We managed to sneak away at one point and built quite a margin,” described Pavoncelli. “But as you know in this race it can evaporate in minutes, because you end up in a wind hole and everyone piles up. We had several restarts, but we managed to stay at the top.”

The final few miles though were extraordinary, as the three leading trimarans closed in on the South Comino Channel. “We were aware of Zoulou coming up behind us,” said Pavoncelli. “There was no sign of Giovanni at all and then suddenly he appears on the lay line straight for the channel and we were worried.” Mana managed to squeak through first and seemingly in a safe pole position, but still it was not over.

“These are best machines in the world that can move in two knots of wind, so you can continue to race all the time,” he continued. “You never park up completely.” Even so, when Zoulou spotted Mana slowing up about 5nm from the finish, the French went offshore in good breeze and managed to considerably reduce the gap. “Literally we saw them when they were 100 metres behind us,” exclaimed Pavoncelli. “Luckily all our manoeuvres came out right, Paul Larsen did a fantastic job and we managed to stay ahead. It would have been very frustrating if we had lost in the last mile.”

Barrier agreed about the emotions: “I had a lot to learn during these two days, and I can tell you I was not really confident going in the Strait of Messina at 30 knots of speed for my first night on a MOD 70. Just at the end we were really scared with Zoulou coming back. Felicitations to them because they were about 7nm behind us some hours before and did very well.”

Fortunate to have such a good crew, Barrier enjoyed her initiation into the world of MOD 70 racing. “We worked well together more like a family to make things happen,” she explained, adding: “The camaraderie shown by the other crews at the finish was also really important. We are all sailors with big values. Friendship is one of the values I like the most in this sport, and it was really evident around the boats here in Malta.”

For Pavoncelli it was the perfect result. Bridesmaid to Maserati in 2020, winning under MOCRA but second on the water, and third on elapsed time last year can now be consigned to the back of the bookshelf. This year’s double success of line honours and overall will sit long in the memory.

Farr 100 Leopard 3 (NED), with Joost Schultz at the helm, crossed the finish line of the 2022 Rolex Middle Sea Race on Tuesday, 25 October to take Monohull Line Honours in an elapsed time of 70 hours 34 minutes 29 seconds. In blazing sunshine, the massive spinnaker bearing the unmistakable logo of the famous maxi was lowered at the Fairway Buoy and the international crew hit the rail for the short beat to finish.

“It is emotional to take Line Honours after three days and nights of racing,” commented Joost Schultz taking part in his first Rolex Middle Sea Race. “There have been lots of ups and downs and surprises, and now I understand why the Leopard crew have been very careful about predicting anything. This race has a lot of twists and turns around every corner, including getting caught in fishing nets and ripping sails.”

“On the first night it was really light winds, we could not see the dolphins around the boat, but we could hear them breathing through their blowholes. We were lucky enough to go around Stromboli in the daytime and we could see the lava rolling down the mountain. The sea was so blue and reflecting in Leopard’s hull. Many times, during the race, we felt like we were at one with nature.”

Leopard 3 made a superb start in Grand Harbour and led the monohull fleet all the way to Capo Passero and through the Messina Strait, where it experienced strong winds over 20 knots. However, on the leg to Stromboli, a broken sail and an entanglement with a fishing net cost Leopard 3 the lead, as Andrea Recordati’s Wally 93 Bullitt (ITA) raced past. It took Leopard 3 until just after Palermo to catch up with Bullitt, when San Vito lo Capo then entered the game with its high cliffs proving a barrier to the wind from the south. Bullitt came to a standstill, Leopard stayed out a little more and edged clear first, breaking into the solid southerly breeze to regain the lead. Leopard 3 had caught its prey and kept a vice-like grip to the finish. Bullitt was the second monohull to finish the race just under an hour behind Leopard 3 on elapsed time.

“Even this year with light winds it is physically and mentally tiring, but for me to do this race with a very good professional crew is a real honour,” explained Schultz. “I have a technical background, so I am very interested in all of the technical aspects of sailing. What I also learnt is how the crew set up the boat, how to look at the sails. We were not always leading the race and it is never over until you cross the finish line.”

From a tactical and navigational perspective, the race played out as expected by Will Best and Mitch Booth, who confirmed that the forecasts at the start of the race came to pass. There were localised moments of strong conditions, such as during the Messina Strait and at the Egadi Islands but, overall, it was a light wind race. The conditions from Lampedusa to the finish were better than expected and made life a little easier on the run to the finish. Leopard 3 was able to maintain a loose cover on Bullitt offering no passing opportunities and not over stretching crew or equipment.